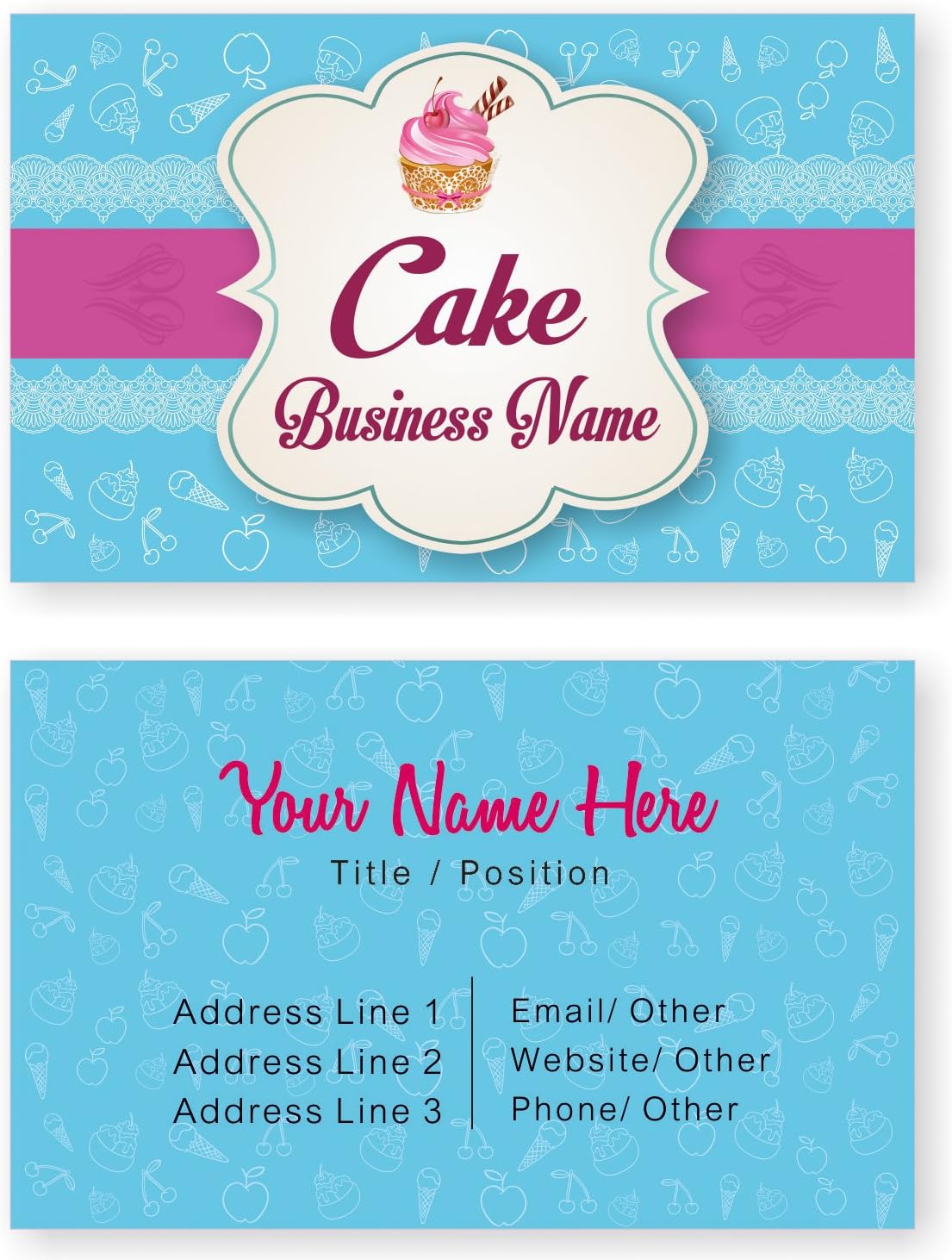 A simple business card speaks volumes about you. So make sure you start the conversation with a high-quality custom business card made your way. Using full-color designs with bold colors and photos. Consider a glossy finish. Designing a simpler, more text-heavy card? Choose a no-sheen matte finish.

Personalize you own business card in very simple steps. Select the design you like for your card. Fill in the details for the card and we wil send you thr proof for the same within next 24 hours of receiving your order with complete details.
After you receive the preview of the card, send us the proof confirmation so that we can send the cards for printing. If any changes are required then let us know via amazon emails and we will get the changes done and send it back to you for final approval.
Cards will be printed on your approval but if we do not receive any proof confirmation from your side in next 2 days then we will get the cards printed as shown in the proof.

Matte
Smooth, flat, and non-reflective finish on both sides of the card.

Glossy
Shiny coating on the front side provides a polished look

From their web site:

The Midwest Plant, a finishing facility that operates as part of Gary Works, is situated about 10 miles east of Gary in Portage, Indiana. Principal products include tin mill products and hot-dip galvanized, cold-rolled and electrical lamination steels that are used by customers in the automotive, construction, container and electrical markets.

Note how dirty their discharge into the lake is compared with Burns Harbor to the east.

Posted by Dennis DeBruler at 1:52 AM No comments:
Email ThisBlogThis!Share to TwitterShare to FacebookShare to Pinterest
Labels: metalIron

NYC was the north/south route.
Another study in postcard colorization.

Did the piers tilt because of scouring or because of the tremendous lateral forces exerted by the flowing water against the tree debris against the trusses? Or because of both?
Posted by Dennis DeBruler at 10:06 PM No comments:
Email ThisBlogThis!Share to TwitterShare to FacebookShare to Pinterest
Labels: bridgeTruss, rrNYC

Bridges: (Bridge Hunter; Satellite)
Tunnel: (Bridge Hunter)
I was aware of the Keddie Wye in the west. I was not aware that the east also has an interesting wye.
Posted by Dennis DeBruler at 10:09 PM No comments:
Email ThisBlogThis!Share to TwitterShare to FacebookShare to Pinterest
Labels: bridgeGirderSteel, rrNaW, tunnel

(Bridge Hunter; no Historic Bridges; John A. Weeks III; Satellite)
RCP&E = Rapid City, Pierre & Eastern Railroad, 2014 to present [G&W]
DM&E = Dakota, Minnesota & Eastern Railroad, 1986-2008 [american-rails, icerail]
I had already encountered the RCP&E because one of their bridges got washed out in 2019. So I had already sorted out the history of the corporate names for this route.
Why am I doing notes on yet another swing bridge? Because this swing bridge means that steamships used to come at least this far up the Missouri River. Since the Gavins Point Dam does not have a lock, now none of the Missouri River is navigable in South Dakota.

(Bridge Hunter; no Historic Bridges; Satellite)
What are the odds that a street view would catch a light move?
Dan Mackey Flickr of an Amtrak train on the bridge
Michael Krejci posted two photos with the comment: "I found this interesting. This is in East Glacier Park, MT. where they get very high winds. Trains were blown off the track here several times, then the RR installed wind breaks on the trestle and that solved the problem."
[There were some comments about the bridge being able to handle the additional lateral wind load.]
Andrew Matarazzo: William Phebus don't forget that the lateral oscillation of a steam locomotives side rods was usually calculated as part of the load on RR bridges. I'm sure someone performed a load rating to ensure it could handle the wind loads in lieu of daily steam traffic.
Robert Barker: cooper e80 live load design. I’m sure it will be fine.
Chad Hansen: Maintained that for awhile. Times they have to stop stacks cause of 100 plus wind gust.
Ben Cornelius: Amtrak’s Empire Builder on this route with its double-deck Superliner equipment has been held on occasion for 4-6-8 hours or more for the winds to diminish.
Billy Hallman: I wonder how many locomotive engineers were fired for train handling before they figured out it was the wind causing the derailments.
Gerald A. Edgar: Having stayed @ both E & W Glacier, & watching trains from the lodge @ W. Glacier, you can indeed get a vortex on that bridge given shape/direction of the deep valley. I encourage all of you to take the E.P. Builder there!
Ronaldo Pencato: Wind load is measured in Kips. Those wind screens don't put enough of a load on the bridge to matter. I build communication towers. We worry about wind load and sheer at elevation
Dave Stratton
A few miles East of there, SW of Browning, MT, the track turns North and South. It is on a fairly high fill and there use to be an anemometer that is tied into the signal system. If the wind speed was a predetermined speed (maybe 60 mph) It stopped trains.
https://www.google.com/.../data=!3m1!1e3!4m5!3m4... [See photo comments below about the wind screen that is here.]
Bob Avritt: Used to have containers scattered along the big curve west if Browning, Montana as well.
Jerome M. Motter Jr.: It kind of solved the problem. We still have wind warnings and have special rules when they happen. That's not even the worst spot. Down in Browning there is an even bigger and longer wind fence.

Posted by Dennis DeBruler at 8:05 PM No comments:
Email ThisBlogThis!Share to TwitterShare to FacebookShare to Pinterest
Labels: bridgeTrestle, rrBN, weather

Now that I know the technical term for a rolling mill booboo, it occurred to me to do a search for "steel mill cobble" on YouTube. There were several results. This was the first one. I wonder if the glass on the pulpit would survive being hit by the cobble. (viewing length is 3:08)
Posted by Dennis DeBruler at 11:35 PM No comments:
Email ThisBlogThis!Share to TwitterShare to FacebookShare to Pinterest
Labels: metalIron

One from https://towns-and-nature.blogspot.com/2019/10/superior-wi-abangn-abannp-bnsf-ore-docks.html:
One from https://towns-and-nature.blogspot.com/2017/09/detroit-mi-1906-waterfront-skyline-and.html:
Posted by Dennis DeBruler at 3:23 PM No comments:
Email ThisBlogThis!Share to TwitterShare to FacebookShare to Pinterest
Older Posts Home
Subscribe to: Posts (Atom)

Dennis DeBruler
The caption of any image that is not mine will indicate the source. My images are © 2014-20, and are licensed by CC BY, https://creativecommons.org/licenses/by/4.0/. Attribution: Dennis DeBruler. Since I hit the 1200 byte limit, I have moved my real introduction to http://industrialscenery.blogspot.com/2014/05/introduction.html.