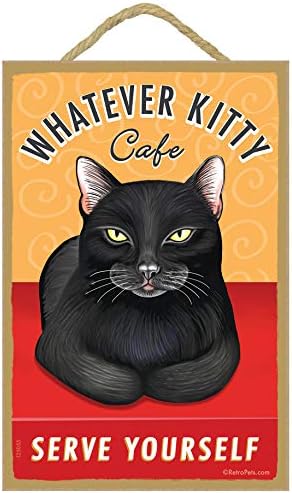 My Retro Pets Booth at the Santa Fe Flea Market, summer of 1998

It all started with a little Jack Russell named Fergus...

(Be sure to watch my video found in the additional photos section of each product if you'd like to hear and see the whole story unfold!)

It was 1997 and I had just moved to Santa Fe, NM. A friend of my roommate was over for dinner and our guest (Jason) knew I was an artist and asked if I wanted to do a painting of his little Jack Russell. (Heck yeah I did!) He gave me some photos of Fergus and told me I could do whatever I wanted. (Even better! Woo hoo!) I have a BFA in graphic design and have always loved vintage graphics so I decided to do it as a large beer sign. I designed and sketched the faux beer label and painted it on wood. I used watered-down burnt umber paint ragged onto the finished painting to make it look old. You can see the Fergus painting in the photo above, bottom left.

I say that I started my business for 7 bucks because that's what the 24x48 piece of plywood cost. (I already had paints and brushes.)

Jason loved it! Everyone loved it, really. That was October of 1997 and I kept thinking how there had to be a business there... just needed to figure it out.

By spring of 1998 I had come up with the name Retro Pets, officially got a business license and launched at the Santa Fe Flea Market in July. Jason (he was the friend that commissioned the Fergus piece, remember?) lent me the painting back every weekend. Total sweetheart. He would leave his front door unlocked every Saturday morning (he left for work super early) and I would drive my little 1995 pickup truck (which I bought in 1996 in Albuquerque) over to his place and throw the painting in the back of my truck and locked his door behind me.

(I'm still driving that little truck, btw... true story! (And one I'm weirdly vain about, LOL.) You can actually see my truck in the photo above... I've got the Champion Golf painting propped on the back bumper. I've kept it up all these years and it still looks super cute (now it's painted metallic dark turquoise) and runs great. And as the saying goes "they don't make 'em like that any more". Hey, what can I tell ya... I like retro!

Every weekend, from summer of 1998 to winter of 2002, you could find me in my booth at the Santa Fe Flea Market (right outside of Santa Fe and just past the Santa Fe Opera House). Set against the backdrop of the beautiful Sangre de Cristo mountains, it was a very artsy market and so much fun!

I was selling at the Santa Fe Flea, taking commissions (I developed a super fun questionnaire that folks would fill out to tell me about their pets (15 Fun Questions I called it) when something fortuitous happened... I met a woman in a copy shop who told me about a 16 week program she had just attended called Marketlink. This was a brand new program developed by the business incubator in Santa Fe and it was specifically a class for women who had owned their own art-based business for at least one year and needed help marketing. Ding, ding, ding! I checked all those boxes! She told me she had just been through the first ever class and another one was just forming. Oh... and I forgot to tell you the best part... This 16 week class was FREE! Amazing! I applied, was accepted and was off to the races. There were 9 other women in the class and we learned soooo much from one another as well as from the class itself. Each week was a different subject - sometimes bookkeeping, sometimes marketing. One week they brought in a lawyer and taught us about copyrighting... another week showed us how to charge for our work to make sure we were actually making money. Stuff like that.

I had a HUGE ah-ha moment in that class listening to a woman who owned a greeting card business... As I listened to her talk about her card designs and selling them to retail shops I realized maybe I could do that with my dog art... Just then the words popped "Patron Pooches" popped into my head... it was almost audible it was so clear. You see, I had just done a commission for a woman who had described her dog as a saint and I had suggested we do the painting as a retablo (which is a devotional painting), you know, like Patron Saints. She loved the idea and the painting came out beautifully.

So I thought, what if I could do patron saint type paintings that were breed-specific and silly and fun? I was excited! I went home and brainstormed with some friends that night. San Terrier de Jack Russell - Patron Saint of Perpetual Motion, Saint Francis de Furter - Patron Saint of Dachshund Devotion, San Canine de Chihuahua - Patron Saint of the Napoleonic Complex... These were fun! The very first one I did was San Retriever de Labrador - Patron Saint of Tennis Balls. I created the artwork with and and ink and colored pencil and had 10 art prints made from my original. That weekend I took them to market and set them in a little basket at 20 bucks each. And guess what... I sold all 10! I was so excited to be going home with 200 bucks. At that point, there were many weekends that I went home empty handed if I hadn't received any commissions. People would say all the time, "Some day I'm going to get a commission from you." And I'd be thinking "But I'm hungry now..." LOL. But now that didn't matter so much... this Patron Pooches art print idea was a game changer and I got to work!

How my art process has continued to evolve over the years...

Around 2004 or 2005 (the mid-aughts) I learned a computer app for artists where you use a tablet (which I sat on my lap like a sketchbook) amp; a stylus to draw with. This was exciting because whereas I used to sketch and draw on Bristol paper and then scan it in and clean it up, now I could hand-draw on my Mac and it was already "in". I loved the freedom this process afforded me. I could create the backgrounds and try lots of different things, putting elements on different layers amp; turning them on and off.

At this point, I was full-on wholesaling my art prints to retail shops around the country (thanks to all I learned in those Marketlink classes!). I was a couple years away from adding greeting cards, then magnets and trade shows but things were going well.

Nowadays I paint on my iPad with an iPencil. In this photo you can see me standing at my easel with my iPad on it, just painting away having fun! (Please notice that my little dog Clementine and I have the exact same head tilt!)

I'm super excited to be introducing these fab decorative wall plaques to add to my lines of art prints, greeting cards and magnets. These plaques are ONLY available in this shop, just so's ya know!

More will be added soon. I'll keep creating my Retro Pets. More breeds on the way!

"p" Thank you so much for stopping by (and hopefully) loving my artwork! I'm a small artist-run business and I sooo appreciate even just your attention and the time it took to read about my little journey!

THANK YOU for supporting small businesses like mine. You are beautiful, wonderful and AWESOME!

And again, if you like, please watch my fun video of how Retro Pets was born. It's in the additional photos of each listing.